What is Negative Ions?

Natural phenomenon, like lightening or waterfalls, ocean waves generate negative ions and ozone. Negative ions are tasteless and odorless molecules found in the air. They are known to increase oxygen flow to the brain to concentrates, decrease drowsiness and stimulate mental energy. Negative ions are also known to protect against germs and decrease throat irritation as well as sneezing and coughing, Negative are healthy for asthmatic, without as many allergens circulating in the lungs.

How are the Air Ionizer Work?

An air ionizer is a relatively a device that is intended to purify the air, instead of using fans or filters, the air ionizer creates ions which remove microscopic particles from the air.. An air ionizer (or negative ion generator) is a device that uses high voltage to create negative ions using electricity. The ions flood high enough concentration in the room and seek out positively charged particles, such as dust, dander, bacteria, pollen, mold, smoke, chemical vapors, and many other allergens. . This causes the floating particles to become heavy, larger pieces of dirt and drop on the ground where they can be cleaned by normal means.

Air ionizers are used in some air purifiers. The Severe Acute Respiratory Syndrome (SARS) Pandemic fuelled the desire for personal ionizers in the Far East, including Japan (where many products have been specialized to contain negative ion generators, including toothbrushes, refrigerators, air conditioners, air cleaners and washing machines). There are no specific standards for these devices.

Indoor air pollution remains a serious problem as our buildings’ insulation interferes with atmospheric air circulation, so an air ionizer seeks to compensate for this disequilibrium. Dust and mold collects inside heating and air conditioning ducts. Higher humidity inside allows bacteria to thrive. An air ionizer addresses these home and office sources of pollution and odor.

Ionisers should not be confused with ozone generators, even though both devices operate in a similar way. Ionisers use electrostatically charged plates to produce positively or negatively charged gas ions that particulate matter sticks to (in an effect similar to static electricity). Ozone generators are optimised to attract an extra oxygen ion to an O2molecule, using either a corona discharge tube or UV light. Even the best ionisers will produce a small amount of ozone, and ozone generators will produce gaseous ions of molecules other than ozone, because air consists of more elements than oxygen. So beware of some salesman sells the ozonizer as ionizer.

A dehumidifier to protect your workplace

Laundry drying with a dehumidifier

How does a dehumidifier work? 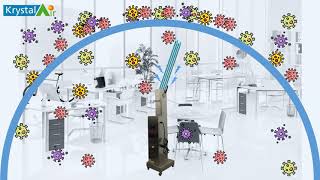 How does an ozoniser works ?